Middletown lions purchased $116 of candy to be bagged for the Middletown Halloween Drive-By around Crystal Lake that would be held on Saturday, October 23, 2021.

On Saturday, October 23, 2021, the Middletown Recreation Department and Youth Services once again sponsored the Halloween Candy Drive-By around Crystal Lake from 10am until 2pm. 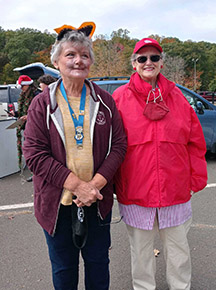 The photo to the left is of Cromwell Director, Pat Scully (in red) and Vice President and Tail Twister, Carol Pajor. 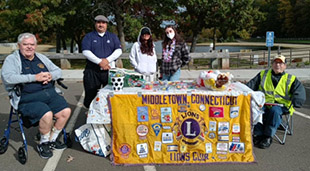 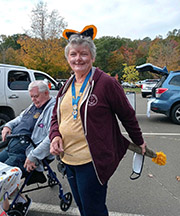 The photo to the left is of Cromwell Vice President and Tail Twister Carol Pajor with candy in hand to give out. 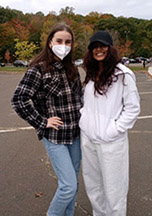 The photo to the right is of MidState CT Leo OfficersPresident -Elect, Abby Kriger and Secretary -Elect, Denise Samarawickrama.

Middletown Tail Twister, Sandra Reynolds and Cromwell Secretary, Petronella Martyn were so busy giving out candy they did not stop for photos.

Middletown and Cromwell Lions along with Leo's elect worked together to make many costumed trick or treater's happy and full of great candy.

We thank the Cromwell Lions and Leo Club members who assisted in this wonderful event.

On Tuesday evening October 19th members of the Middletown Lions Club met for their monthly dinner meeting at the Athenian Diner in Middletown, CT.

That evening's meeting went off without a hitch. But there was sadness in the air.

Nineteen-year member Sandra Reynolds would be at her last meeting as a Middletown Lion. She and her husband Christopher will be moving back to Texas to be with family.

During her years in our club, she held the positions of club Secretary, Membership Chairperson, Tail Twister, and Lion Tamer.

Lion Sandra has been a special part of our club. She has had a way of bringing joy and excitement to everyone around her.

At the end of the meeting club President, Ellie Paules made a presentation to Sandra. 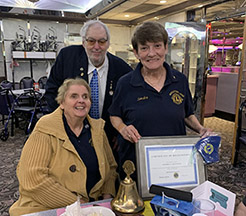 The photo above is of Club President Ellie Paules (center) presents Lion Sandra with a framed Certificate of Recognition and other gifts from the club (right) while Club First Vice President Howard Geltman (left) looks on.

Sandra, we will miss you! Happy Trails to you

The Middletown Lions Club participated once again in the Middletown Town-Wide Tag Sale on Saturday, September 11th from 9am until 2pm.

Members of the club: Ellie Paules, Marty Knight, Richard Pelletier, Ada Spillane, James Beyer, Sandra Reynolds, and Audrey Klein all participated at either the setup or the tag sale itself. The club's tables were set up outside of ACE Hardware on Main Street. The club made $368 at this fundraiser. This money will go to assist people in our community. 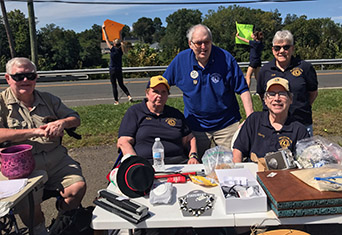 The photo above is of (from left to right) Richard Pelletier, Ellie Paules, Marty Knight, and Ada Spillane in front with club member and District 23C Region 1 Chairperson, Howard Geltman standing behind them.

Saturday, August. 28th at the New Britain Bees Stadium from 4pm until 6pm over two-hundred and fifty lions from Multiple Districts 23A, 23B, and 23C came to celebrate one-hundred years of Lions in the state of Connecticut.

Prior to the start of all of the festivities clubs marched with their club banners held high. 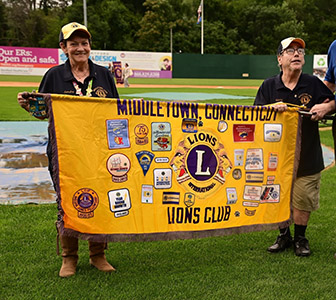 The photo above is of Sandra Reynolds and Marty Knight holding the Middletown Lions Club Banner high as they marched around the stadium. 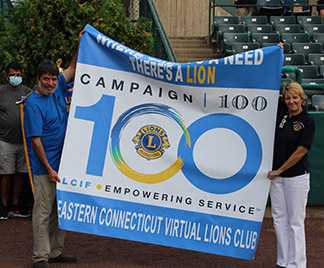 The photo above is of Eastern Connecticut Virtual Lions members Renee Williams and Jake Scanlon parading with the Campaign 100 Banner. 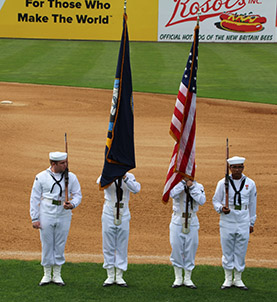 The photo above is the Honor Guard - Silver Dolphins from the Submarine School in Groton, CT. 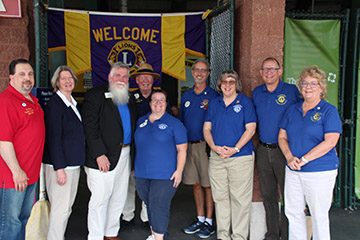 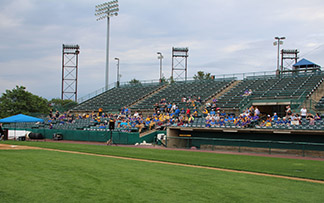 The photo to the right is of a view of the New Britain Bees Stadium from far out in center field.

During the year the Middletown Lions Club conducted this aluminum can tab collection drive. We thank all of the various lions clubs that donated to our project from all three lions districts in the state: 23-A (New Haven and Fairfield counties), 23-B (Litchfield and Hartford counties), and 23-C (Middlesex, Tolland, windham, and New London counties). 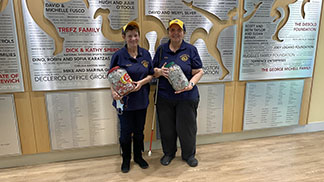 The photo above is of lions Sandra Reynolds and Ellie Paules holding just a couple of the many containers of aluminum can tabs they had with them in the reception area inside Ronald McDonald House.

Due to COVID-19 precautions in the facility they could not meet in person with facility officials.They were not permitted to pour the contents of all of the containers they brought with aluminum can tabs into the large receptacles inside the building. 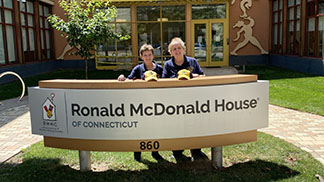 The photo above is of lions Sandra Reynolds and Ellie Paules standing behind the large Ronald McDonald House sign outside the building.

We thank all of the lions clubs in Connecticut who helped us reach such a wonderful goal this past year.

The Middletown Lions Club maintains a number of eyeglasses collection containers where you can donate unwanted used eyeglasses to be recycled. They are:

We thank you for your kind donations.

3rd Tuesday of the month
Meeting starts at 6:30pm.
Members should arrive by 6:20pm
to place their meal orders.