On Tuesday, June 30, 2020 the Middletown Lions Club held its last meeting of the lions year (July 1st thru June 30th).

Our guests for the evening were District 23C Governor, Diana and husband lion Donald Grise (who was our photographer for the evening), Zone Chair, Maryjane Malavasi, Sarah Moore, Director of Philanthropy at Middlesex Hospital, and Kit McKenna RN, Diabetes Coordinator for the hospital. 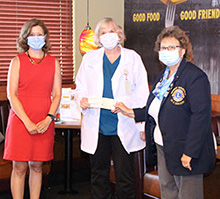 District Governor, Diana that evening would be performing her last two induction and installation ceremonies for her term.

District Governor, Diana performed the induction of Jeanna Pellino and Ada Spillane. They had become members in March but because of COVID-19, were not able to meet to formally induct them as lions into our club.

Howard spoke to the club for a few minutes about his two years as club President and what it meant to him. He thanked all of the members for working so hard as a team for the past two years. He told the club of all its service activity achievements during this past year.

DG, Diana then installed all of the officers for 2020-2021. Because of the needed social distancing, no photos of each member being installed were taken.

After the installation ceremony, Immediate Past President, Howard transferred the bell and gavel to President, Ellie Paules and wished her much success for the next year. 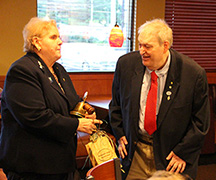 The photo to the right is of new club President, Ellie Paules receiving the bell and gavel from Immediate Past President, Howard.

President Ellie said, “She did not know if she could fill Howard’s big shoes”, and then presented him with a gift from the club.

The photo to the left is of Immediate Past President, Howard holding a small statuette with BIG feet that was presented to him from the club.

Howard presented District Governor, Diana with a cross pen as a gift from the club for being a great District Governor for the past year and for conducting our induction of new members, as well as, the installation of officers. 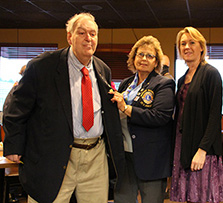 The photo to the right is of DG, Diana (center) placing her pin on Immediate Past President, Howard (left), and Zone Chair, Maryjane Malavasi (right) looking on. 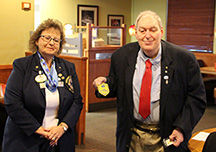 The photo to the left is of District Governor, Diana (left) presenting Immediate Past President, Howard (right) with the Club Excellence Award patch for the club banner.

After waiting since March to finally have a club meeting in person which included an Induction of our two newest members Jeanna and Ada, and an Installation of Officers - the wait was worth it!

Congratulations to our newest members and to our new officers for the next year.

The Middletown Lions Club maintains a number of eyeglasses collection containers where you can donate unwanted used eyeglasses to be recycled. They are:

We thank you for your kind donations.

3rd Tuesday of the month
Meeting starts at 6:30pm.
Members should arrive by 6:20pm
to place their meal orders.

Together Serving the Middletown Community